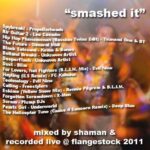 oh yes oh yes, i’ve been waiting for this one 🙂
thanks!

Really did smash it !!

What a superb name for a mix.

All true though. Big ups Jamesy. This shit’s gonna go global. Fabric awaits. And then what…?